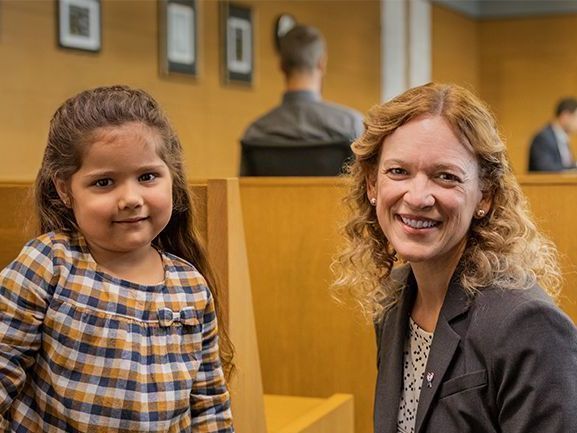 The mission of the Washoe CASA Foundation is to support the Washoe County CASA Program through fundraising, advocacy, outreach, and community awareness.

The Washoe CASA Foundation is a 501(c)3 organization. We are the auxiliary organization supporting the Washoe CASA Program in promoting CASA volunteerism and providing funding and support for the needs of CASA children.

The Washoe CASA Foundation, which is governed by a dedicated Board of Trustees, works to secure resources for CASA by creating partnerships and relationships within the community.

In the late 1970’s, the National Council of Juvenile and Family Court Judges endorsed the concept of volunteer guardians ad litem for abused and neglected children. The first CASA program was started in 1977 in Seattle, Washington. Today there are more than 85,000 volunteers speaking up for 280,000 children. With encouragement from Judge Charles McGee, the Junior League of Reno began the Washoe CASA program in 1982 with only eight volunteers. Overall, the program has served over 5,000 children since its inception.

Washoe CASA Foundation provides funding for volunteer training, recruitment, and community awareness.  The Foundation’s financial support has enabled CASA volunteers to secure needed services for their child such as after school tutoring, paying for a recreational program, purchasing clothes for Prom, or school supplies. We hope that this support will give a child a sense of value and importance.

We rely on our community for a large portion of our funding, as well as our dedicated volunteers and active board members who work with children.  Current goals of the Foundation include increasing our outreach potential, connecting with local businesses to create partnerships that support Program and advocate needs, and increasing the number of CASA volunteers.  We are also proud of our fundraising campaign, James' Special Day, which aims at providing each child involved in the program with something every year to celebrate an accomplishment in their life.

What is the Washoe County CASA Program?

Why Our Work Matters

By recruiting volunteers for the CASA Program, the CASA Foundation utilizes a relatively small investment to leverage the time, energy, and compassion of volunteers to bring about real results for abused and/or neglected children. CASA volunteers help to ensure that children have access to the services they need in order to succeed while helping to ensure that the children find safe and permanent homes.

The Washoe CASA Foundation exists to create opportunities for the community to become more involved and supportive of CASA and in turn, to help children in foster care.

The results can be dramatic which a CASA is assigned to a case. Studies show that children with CASA volunteers are more likely to end up in safe, permanent homes, whether reunified with their parents or adopted, rather than languishing in foster care. They are also more likely to receive needed services, such as therapy, health care, and education.

Please consider becoming part of our growing network of Washoe County citizens uniting to create a stronger, safer community for this generation’s children and the next. Change a Child's Story. Become a volunteer!

The Washoe CASA Foundation joins National CASA/GAL in speaking out against  racism and injustice. Studies have shown the prevalence of racial disproportionality  and disparity in the foster care system. Ensuring equitable outcomes for the  children involved in our program, regardless of race, gender, or sexual orientation,  remains a priority. As an organization, we are committed to ensuring that every  child has a voice in court and has every opportunity to flourish. We cannot  accomplish this when children in care are experiencing a world that is inequitable  and unjust.

We affirmatively take a stand against systemic racism. We are taking this  opportunity to carefully examine our own principles and role as an organization.  We are committed to improving our efforts to promote diversity and cultural  competence among our volunteers through recruitment, education, and training.

If you have any suggestions on ways that we can improve our organization, please  let us know. We hope to work with you to create a better community for all,  especially the children we serve.